Good nutrition is an imperative part of eye health. One of the most important nutrients is a carotenoid called zeaxanthin. Carotenoids are the molecules that give plants their colors, such as yellow, orange, and red. Zeaxanthin, in particular, gives a yellow color to plant-based foods such as corn, saffron, paprika, and more. There are around 700 carotenoids found in nature, but only zeaxanthin and lutein (another nutrient that helps protect vision) are deposited in high quantities in the eyes. As we age, those nutrients stop replenishing themselves, which is where a good diet comes into play. Read on to learn about the role zeaxanthin plays when it comes to eye health.

Protects the Eyes from Blue Light

When people think of blue light, usually what comes to mind are computers, tablets, or cellphones, but the truth is that blue light is everywhere. It can not only come from digital devices, but also from the sun and certain kinds of indoor lighting. Visible light contains a range of wavelengths and energy, and blue light is the one that contains the highest energy, which is why it is the most harmful to the eyes. Zeaxanthin, along with lutein, acts as a “natural sunblock” for the eyes by absorbing excess light energy.

Focus Blue Light formula, which contains lutein, zeaxanthin, and meso-zeaxanthin, is a natural filter of high-energy blue light. Our formula promotes healthy eye function by increasing macular pigment in the eye and improves contrast sensitivity and glare to help the eyes quickly recover after use.

Aside from blue light, our skin is constantly getting exposed to elements, such as polluted air and chemicals in the environment, that can lead to skin damage. Because zeaxanthin is an antioxidant, it helps fight off damage from these elements by accumulating in the dermis and protecting the skin.

AMD is the leading cause of blindness in the United States and it affects more than 10 million Americans. Currently, there is no cure, but there are ways to prevent it and slow its progression. In fact, there have been many studies conducted that show the benefits of zeaxanthin and lutein can have when it comes to AMD. One of these studies, and perhaps the most known, is the AREDS2 study published in 2013. This study revealed that participants whose diets contained the lowest amounts of foods containing natural lutein and zeaxanthin experienced the greatest AMD risk reduction from taking the daily nutritional supplement. The table below shows foods that contain both zeaxanthin and lutein and should be included in people’s diet, whether or not they have been diagnosed with macular degeneration. 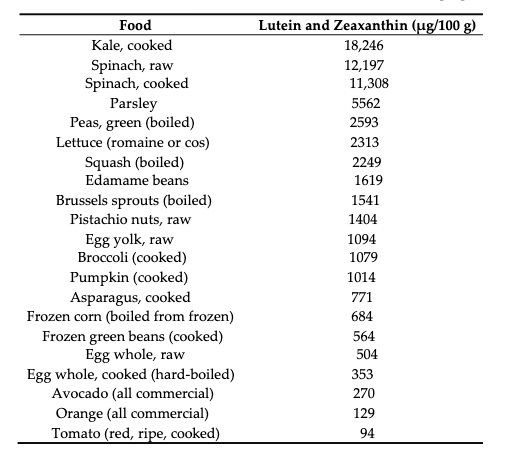 For people who have not been diagnosed with AMD, these foods are a great way to decrease the risk. For those who have been diagnosed, eating these foods can help slow down its progression, especially when paired with AREDS2 vitamins, such as Focus Select®.

Focus Select® utilizes the latest improvements discovered in the AREDS2® study mentioned earlier. Our formula contains 10mg of lutein and 2mg of zeaxanthin per serving, as well as copper, zinc, vitamin C, and vitamin E.